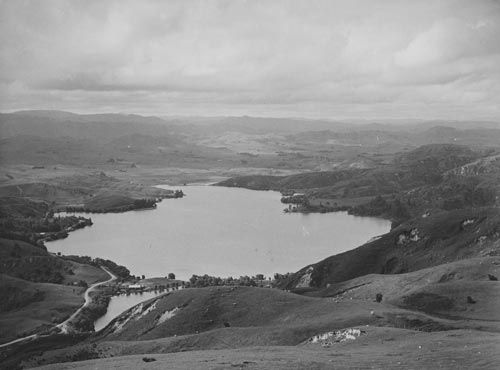 State Highway 2 hugs the western side of Lake Tūtira, 40 km north of Napier. The lake is the centrepiece of the Tūtira Country Park, a reserve managed by Hawke’s Bay Regional Council and the Department of Conservation. The reserve is part of a larger farm which was the inspiration for Herbert Guthrie-Smith’s renowned book Tutira: the story of a New Zealand sheep station (1921). Guthrie-Smith farmed the land from 1882 until his death in 1940. In Tutira, Guthrie-Smith describes the first time he saw the lake:

‘We rode along the shelf of the flat until suddenly, in an instant, the lake lay at our feet. The feelings of one of the new owners were those of Marmion’s squire at sight of Edinburgh [a reference to Walter Scott’s 1808 novel Marmion]. Had the grass-fed pony permitted the feat, its rider, like Eustace, would have “made a demi-volte in the air” at joy of the prospect. Before his eyes lay the whole length of the lake, picturesque in its wooded promontories and bays. Along its steeps grew breaks of native woodland brightened at this season with the deep yellow blossoms of the kowhai. The silky leaves of the weeping willows were in their tenderest green, the peach-groves sheets of pink. The south-westerly breeze that blew stirred the flax blades, making them glitter like glass; west of the lake the land was dark in shadow, the eastern hill-tops were bright in sun. I have looked at this lovely sheet of water a million times since then, but have rarely seen it more fair.’ (p. 149)