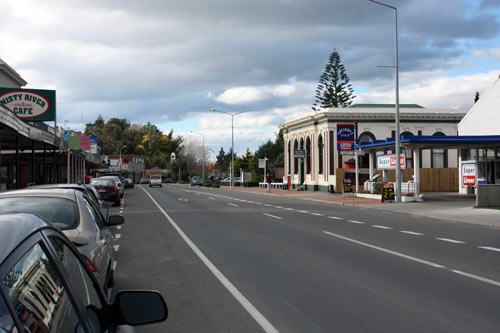 The west (left) side of modern-day Waipawa’s main street contains a number of shops built in the 19th and early 20th centuries, including some art deco shops, which support the town’s brand as the oldest inland settlement in Hawke’s Bay. The east side, though, has very few older buildings – a puzzling sight for the observant visitor. Most of the colonial-era buildings on this side were demolished in 1986 after the council built a new (and ultimately unsuccessful) shopping mall behind the west side. The substantial masonry building next to the bottle store on the east side is an old Bank of New Zealand branch which was gifted to the town in 1986. It is now the Central Hawke’s Bay Settlers Museum.