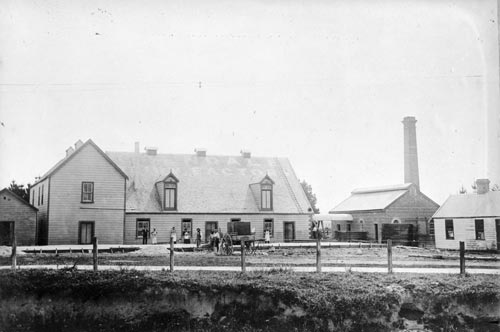 The Edendale Dairy Factory, shown here in 1895, was bult in Southland in 1882. It was the first large-scale plant of its type in New Zealand. In the early 1880s the government offered prizes for producers who developed new products for the export market, to reduce dependence on a single product: wool. In 1884 the Edendale factory won bonuses for exporting of 25 tons of cheese and 50 tons of butter.

Robert Peden, 'Farming in the economy - Refrigeration and the growth of the dairy industry', Te Ara - the Encyclopedia of New Zealand, http://www.TeAra.govt.nz/mi/photograph/17619/edendale-dairy-factory-1895 (accessed 19 January 2022)