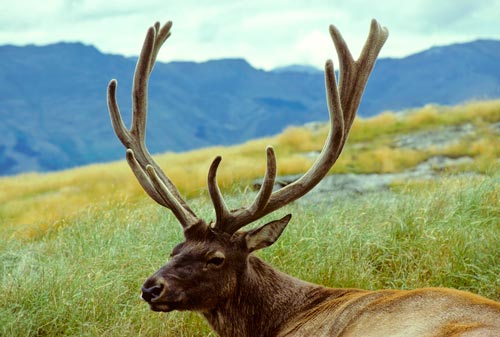 Wapiti are the largest round-antlered deer in the world. This male is a descendant of some of the 18 animals released at the head of George Sound, Fiordland, in March 1905. They spread slowly but by 1925 had colonised an area of 100 square kilometres of rugged mountain country. They were introduced as sport for trophy hunters. Some huge heads were shot from 1923 to 1935, when protection for wapiti was removed. By the 1950s, red deer were interbreeding with them. The pure wapiti strain is no longer found, but red deer–wapiti hybrids are still keenly targeted by hunters in Fiordland.