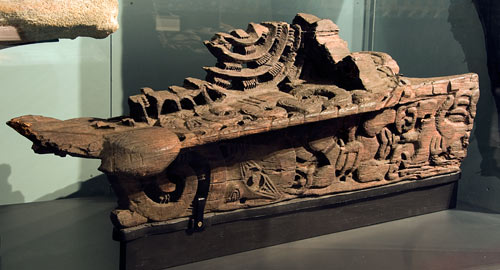 This prow (tau ihu) of a war canoe (waka taua) was found at Triangle Flat at the beginning of Farewell Spit by early settler Edmond Davidson. It is only the base of what would have been an elaborately carved prow. Big totara trees were felled by Māori at Triangle Flat and hauled to the beach on the Golden Bay side of the spit, from where they were floated to an area of freshwater lakes about one quarter of the way along the spit. Hauled ashore, they were hollowed out using fire and adzes. The Richards brothers, who ran cattle on the spit from 1926, found large adzes in this area. Māori used to portage (carry) their waka across the base of the spit when they were travelling down the west coast of the South Island. Golden Bay – which Māori called Mohua – was strategically important. Whoever controlled it controlled the Poutini coastal trail – one of the major routes along the Kahurangi coastline to the west coast and its pounamu (greenstone or jade).