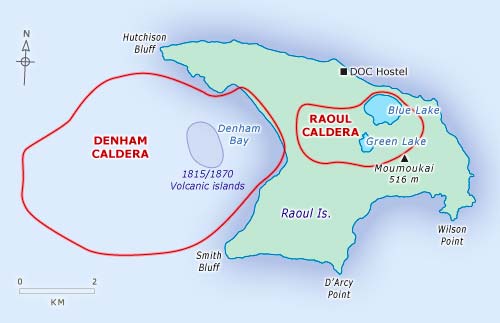 Raoul Island has been shaped by volcanic activity and marine erosion. In the last few thousand years volcanism has been centred in the Raoul and Denham calderas. These are collapse structures that formed after major volcanic eruptions. Although the Denham caldera is largely offshore, its existence has been confirmed by marine seismic surveys.

Source: T. J. Worthington and others, ‘The Denham caldera on Raoul volcano: dacitic volcanism in the Tonga–Kermadec arc.’ Journal of Volcanology & Geothermal Research 90 (1999): 29–48

A solution to Ohakune’s flagging economy