Attempted assassination of the Duke of Edinburgh: letter of gratitude (2 o 2) 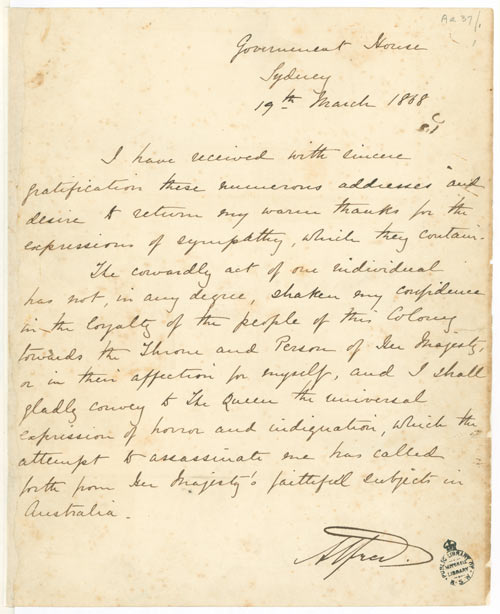 A letter from Prince Alfred, the Duke of Edinburgh, to the people of Australia, written on 19 March 1868, a week after the assassination attempt. Alfred expressed his gratitude for the many addresses of sympathy he had received, and assured Australians that he had no doubts of their loyalty to the Crown. News of the assassination attempt led to many meetings in the Australian colonies, with addresses of sympathy and loyalty being sent to the duke. With no telegraph link, it took 10 days for the news to reach New Zealand, where there was a similar round of meetings, bonfires, parades, patriotic songs and loyal addresses. In both Australia and New Zealand many prominent Irish Catholics were keen to express their loyalty and distance themselves from Fenianism (Irish nationalism). In the gold rush town of Hokitika, the assassination attempt inflamed tensions between local British patriots and Fenians who, only a few weeks earlier, had protested against the hanging of three Irish rebels in Manchester. Five leaders of the Hokitika Irish nationalists, including Father William John Larkin, were arrested for seditious libel on 27 March 1868.

The Duke of Edinburgh had been scheduled to visit New Zealand after his Australian tour. Instead, he returned to Britain. Within a year he was back in the southern colonies, making the first royal tour of New Zealand in April 1869.

I have received with sincere gratification these numerous addresses and desire to return my warm thanks for the expressions of sympathy, which they contain.

The cowardly act of one individual has not, in any degree, shaken my confidence in the loyalty of the people of this Colony toward the Throne and Person of Her Majesty, or in their affection for myself, and I shall gladly convey to the Queen the universal expression of horror and indignation, which the attempt to assassinate me has called forth from Her Majesty’s faithful subjects in Australia.

Attempted assassination of the Duke of Edinburgh: Henry James O'Farrell