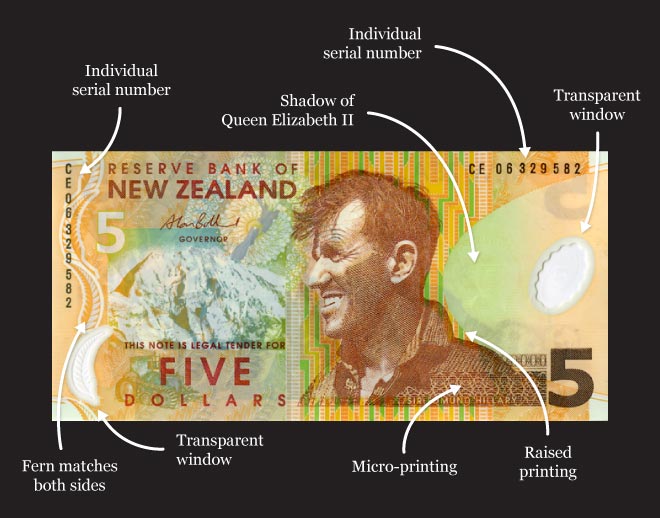 The image of Queen Elizabeth II was replaced on all banknotes except the $20 by prominent New Zealanders. It was retained as the watermark on each note, which has a different set of native birds and plants on the reverse side. Māori tukutuku (woven panel) designs are part of the security patterns. The notes increase in size with each denomination.

The fifth-series $5 banknote, which is orange and brown, features mountaineer Edmund Hillary, a Massey Ferguson tractor and Aoraki/Mt Cook on the obverse side. The tukutuku design behind Hillary is based on a panel at the Tāne-nui-a-Rangi wharenui (meeting house) at the University of Auckland marae. It is the kaokao pattern, which represents human strength. The reverse side features a scene from sub-antarctic Campbell Island, including the hoiho (yellow-eyed penguin), bull kelp and a sub-antarctic daisy and lily.

From 1999, a sixth series of banknotes (pictured above) were made from polymer (plastic) instead of paper. This allowed the introduction of a suite of new security features, which are illustrated on this $5 note. The micro-printing is the letters RBNZ, which should be visible through a magnifying glass. The shadow image of Queen Elizabeth II is a watermark image embedded in the note.