A toast at sunset 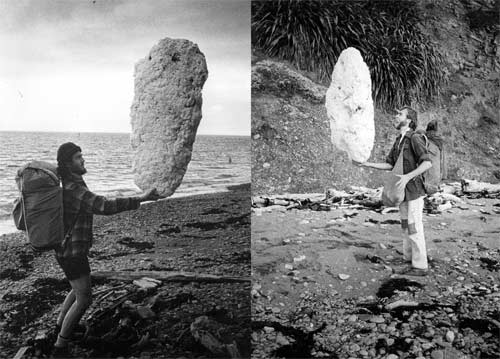 In 1979 two friends walking around the south coast of Wellington found a rich array of flotsam and jetsam, including this large lump of polystyrene, which resembled a rock, and a whisky bottle with a bit left inside.

Contributed by Mike Bradstock of Christchurch.

In midwinter of 1979 my mate Pete and I set off to tramp from Makara round to Island Bay, right along the shore that lines the throat of Cook Strait. We took our time over it – five days.

The diversity of flotsam and jetsam was fantastic. It was half the fun of the trip. But the best find of all was the Suntory whisky bottle we found lying among the boulders south of Ōhau Bay.

The top was screwed firmly on and there was a good half a cup of golden liquid inside. Pete's eyes lit up when he sniffed the contents. He gave me a speculative look as I took a sniff in turn. We discussed whether maybe some cynical Japanese fisherman might have pissed in the bottle, but discounted that as too absurd.

Decisively, Pete took a large sip, and it was immediately clear from his expression that it was OK, so I sculled the rest. We stood there in the sunshine and felt the golden scald going down like the setting sun. And it was good.