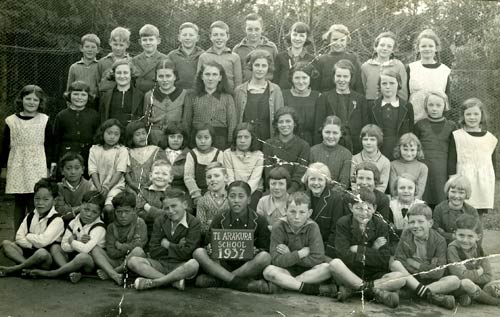 Ngaire Swinburne (then Ngaire Harper) attended Te Arakura School, between Feilding and Palmerston North, in the 1930s. In this 1937 photo Ngaire is fourth from right in the back row, next to her foster sister, Kath Bennett (Davies).

The corner the school was on is approximately 6 miles from Feilding on Camerons Line, and seven and a half miles from Palmerston North on Milson Line.

One of the teachers in the primer’s room was Miss White, who had had voice training and put together some beautiful songs for us to sing in choir. Miss Winona Bailey taught us songs from the Dominion song book.

When it was close to fancy-dress-ball time, Miss Bailey taught us to waltz, quick step, etc., so that we could all join in the fun. Before the hall was built we used to practise on the school tennis court. Afterwards we practised rain or shine in the hall.

We used to have calf judging days each year. I only ever entered once with Trixie, my calf. I couldn’t get Trixie to go out the gate and had to call on several boys to help push her up the road to school. Coming home was quite different. The school gate was opened for her and she just took off and went for her life down the road, dragging two boys hanging onto the rope with her. She didn’t need to be told where home was.

We also had our school picnics, which were held at Campbell’s Bush close by the Awahuri dairy factory. In front of the bush was a long clear space where we used to have our races. Pop Bennett’s big old fabric-covered car was always packed with kids as it was about a three-mile walk there from Te Arakura. There would be kids in layers inside. Outside they would be standing on the running board, and off we would go at a slow and steady pace.

When it was coronation time we were very excited because we were all going by bus into town and the theatre. We had all our best clothes on and crowded onto the bus and off we went. Of course when it was over there was an essay to write on what we had seen at the theatre.

Then there was prize giving for the year. Everyone helped with the funding for the book prizes. I still have my book, Just Peggie, by Margaret Stuart Lane, in quite good condition, inscribed ‘Ngaire Harper, Std I, 1934’.