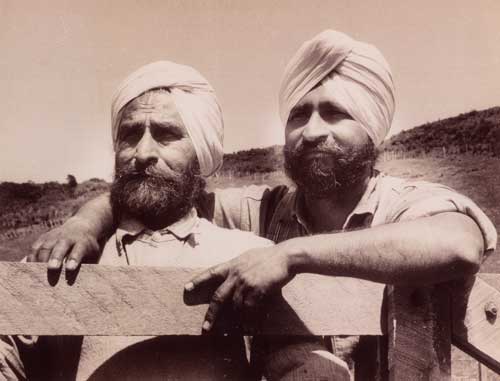 Genda Singh (left) was a Punjabi who arrived in New Zealand as a young man. After years of working as a scrub cutter and farm labourer he fulfilled a dream and with his son Chanan (right) bought a farm on the outskirts of Wanganui in 1952.

Orphaned at 14 and responsible for the wellbeing of his family, Genda Singh’s courage, resourcefulness and sheer hard work are a source of ongoing inspiration to his descendants. Here is the story of the 12th Punjabi pioneer to emigrate to New Zealand.

As the wailing of the villagers intensified around them, the little girl clung tighter to the hand of her elder brother, Genda Singh. Following slowly behind his mother’s body as it was carried towards the cremating grounds, 14-year-old Genda felt the weight of the world on his shoulders as he tried to envisage life as an orphan.

Twelve years earlier his father, Deva, had left India in search of greener pastures in South Africa. Most of his earnings were sent home to support his wife, Rani Kaur, and their young family. But after three years of hard toil, and on the verge of prosperity, Deva was robbed and murdered.

Genda Singh realised his only option for a better life was to travel. So in 1905, at the age of 17, he left to travel and work around the Middle East and Europe. As most countries did not allow foreigners to stay longer than six months, Genda was forced to move from one country to the next.

While on his travels Genda heard that, in New Zealand, if you could complete the arrival form in English you were granted a permanent resident visa. Through this policy, Genda was the 12th Punjabi to settle in New Zealand and the first to arrive via Fiji.

For five years he worked in the Wanganui area as a scrub cutter and farm labourer. In 1917 he travelled back to India to get married. With his hard-earned money he built the first brick house in his village Govindpur. He also bought prime agricultural land and raised a family of two boys and two girls, all the while travelling back and forth between New Zealand and India to work.

His overseas earnings allowed his children to be well educated and in 1938 his eldest son Chanan joined him in New Zealand. Twenty-year-old Chanan knew that although scrub cutting was hard work, father and son would have to make sacrifices to get ahead.

In 1941 they both travelled back to India for Chanan to be married. Chanan stayed in India to raise his family, operating a taxi business in Lahore until the partition of the subcontinent in 1947 forced them to move to India. Disheartened with the turmoil and upheaval, Chanan decided to return to New Zealand in 1948, bringing his young family with him.

In 1952 Genda and Chanan had saved enough money to fulfil their life-long dream of buying a farm. They purchased 250 acres of neglected farmland, almost completely covered in gorse and scrub, on the outskirts of Wanganui. What would have been a daunting prospect to many was just another challenge for them. Genda Singh worked on this farm and decided that when he turned 70 he would return home to India to retire. But sadly in 1958, two weeks shy of his 70th birthday, Genda Singh passed away.

Today, Genda’s descendants are spread throughout the world – New Zealand, Canada, the United States, the United Kingdom and India. Here in New Zealand, his nine grandchildren and 21 great-grandchildren live the life that Genda was determined to provide for them. We are all proud of this courageous and unselfish man who suffered much by leaving his home in search of a better life for his family.