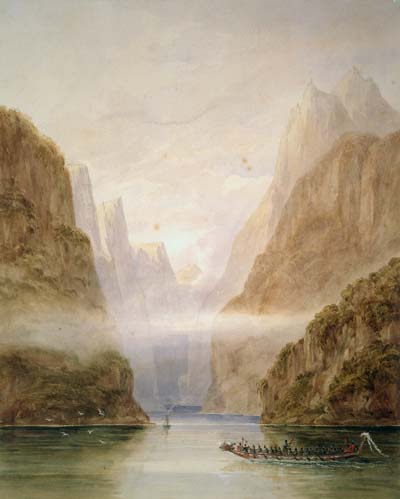 In the early 19th century a Welsh sealer, John Grono, named the most spectacular of New Zealand’s southern fiords Milford Haven, after a place in his Pembrokeshire homeland. Another Welshman, John Lort Stokes, later changed the name to Milford Sound. In March 1851, HMS Acheron, of which Stokes was captain, anchored in the sound. In this painting by Frederick Evans, the Acheron, in the distance, is dwarfed by the landscape. The Māori war canoe in the foreground is likely to have been a matter of artistic licence since there was no mention of Māori in accounts of the Acheron’s visit.