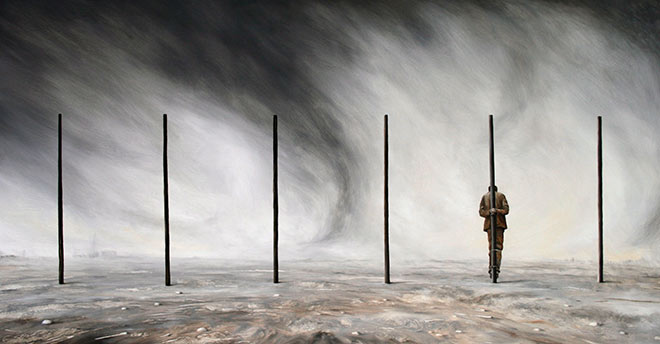 This painting by Bob Kerr shows Archibald Baxter enduring field punishment no. 1 or 'the crucifixion', as it was known. Baxter was one of over 2,000 New Zealanders who resisted conscription following its introduction in October 1916. Baxter was a Christian socialist and committed pacifist, but these were not grounds for avoidance of service. Along with 272 others, he was imprisoned. It was then decided to send 14 resisters overseas for service. Baxter continued to resist, and in the company of two others he suffered field punishment no. 1 in October 1917. The men were tied to a post in the open with their hands bound tightly behind their backs for up to four hours in all weathers. The poles were tipped forward, and the ropes cut into the flesh, cutting off blood flow. This painful experience did not break Baxter's determination that he would not assist the war, and he was finally sent home in August 1918, one of only two men to resist service until the end. Baxter described his experiences in a classic account, We will not cease.

Private collection
Oil on board by Bob Kerr