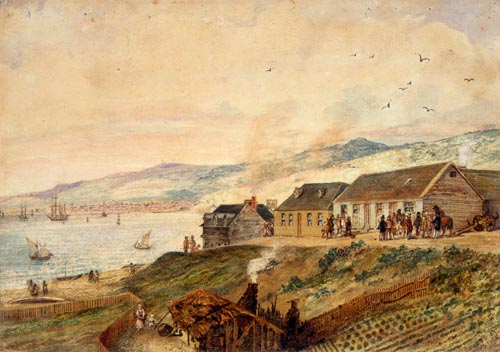 An 1843 watercolour by Samuel Brees shows buildings on the Wellington waterfront including, on the right, the courthouse. Courts were established in New Zealand in 1840. In the early days of Pākehā settlement, court buildings were simple structures. This courthouse doubled as a church. Next door to it is the Thistle Inn, which was still standing in 2011, although the court building was long gone.

Philip A. Joseph and Thomas Joseph, 'Judicial system - What is the judicial system?', Te Ara - the Encyclopedia of New Zealand, http://www.TeAra.govt.nz/mi/artwork/33929/courthouse-wellington-1843 (accessed 5 August 2020)