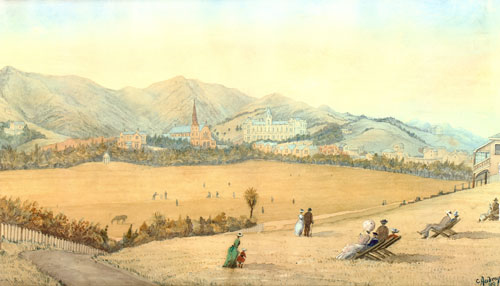 The Basin Reserve in Wellington was originally a swamp, but the land rose in the 1855 earthquake and two years later some cricket enthusiasts secured the area as a recreation reserve. It took some time before the ground was ready for cricket, and the first game was played in 1868. A grandstand was also built in that year. For a period the ground was also used for Caledonian games, but cricket took primacy, with the first official first-class match held in 1876. Christopher Aubrey's painting shows a game in progress in 1889.

Cricket at the Auckland Domain, 1910s