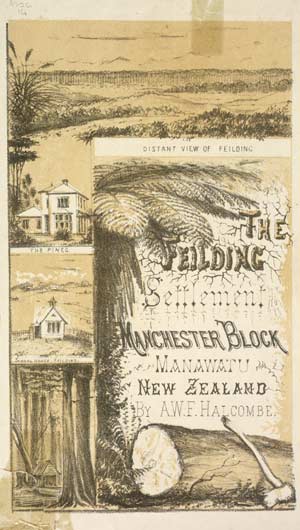 A significant English settlement was on the Manchester block in the Manawatū. Its popularity was a result of the activities of Colonel William Feilding’s Emigrants and Colonists’ Aid Association. About 1,000 people settled in the Halcombe district between 1874 and 1877. A. W. F. Halcombe wrote a book about the settlement, and his wife Edith illustrated the title page, pictured here, with vignettes of Feilding life. They begin in the bottom right with the felling of the bush, move anticlockwise to show progressively larger homes, and conclude at the top with a distant view of the successful settlement.

Alexander Turnbull Library
Reference: A-226-014
Lithograph after an illustration by Edith Stanway Halcombe