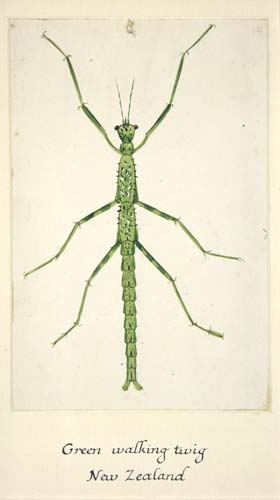 Stick insects are also known as walking sticks or walking twigs. This watercolour by artist John Backhouse (1845–1908) was painted about 1880. It depicts one of New Zealand’s eight species of variable stick insects (genus Acanthoxyla). At this time, and for many decades to follow, stick insects were poorly understood. William Colenso, the missionary and naturalist, came across specimens during his walks through the North Island and published papers in the Transactions of the New Zealand Institute in 1882 and 1885. In 1898, naturalist F. W. Hutton published a revision of the known New Zealand species. He had great difficulty in identifying male stick insects of various species, as they looked different to females, often being much smaller. He would have had no success locating an Acanthoxyla male, as none have ever been found.