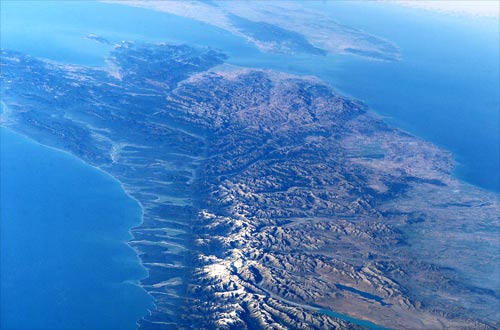 The Alpine Fault bisects the South Island, forming the western edge of the snow-covered Southern Alps. It forms a clear topographic feature on this satellite image. Although New Zealand’s main geological features were recognised by the late 19th century, the Alpine Fault was not identified as being a single large fault. It was not recognised until 1941, when Harold Wellman and Dick Willett were sent to look for minerals in South Westland. In 1948–49 Wellman proposed that the rocks on opposite sides of the fault had originally been joined and gradually moved apart about 480 kilometres. This theory was highly controversial for many years, but is now generally accepted.