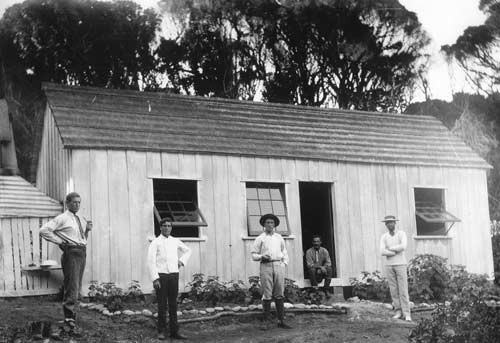 Photographed in 1908, the Canadian geologist James Macintosh Bell. Bell, his manservant, and other members of his party pose outside the original Heaphy hut near the mouth of the Heaphy River. The hut was built as a base while geologists worked in the area.

Bell had enormous energy. In the six years he spent in New Zealand, less than a third of his time was spent in the office. He undertook long periods of field work every year, travelled widely in New Zealand and overseas, and kept a close eye on his field staff. He co-authored five Geological Survey bulletins covering different parts of the country and published 40 papers and reports.