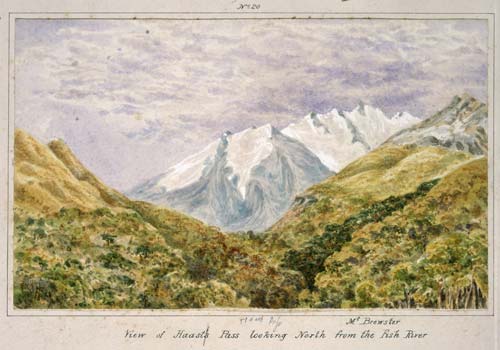 Early European explorers searched for routes that travellers could use to cross from the eastern to the western sides of the South Island and vice versa. In January 1863 a party led by Julius Haast travelled up the headwaters of the Makarora River, and on 23 January they reached the open, boggy summit of the pass, which is surrounded by beech forest. Haast made this watercolour which was used to illustrate a later report. The party then crossed the pass, and travelled downstream to the coast, which they reached on 20 February.

Although the prospector Charles Cameron is said to be the first European to ‘discover’ the pass, Haast was rewarded by having it named after him.