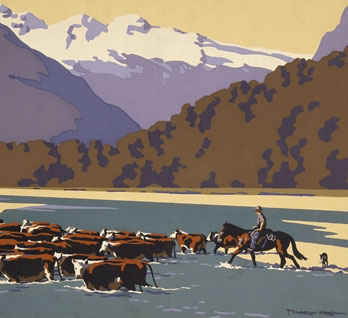 The wild West Coast is a long narrow strip of New Zealand’s South Island, between mountains and the sea. West Coasters are seen as strong and pioneering, and as rugged as their landscape. Many were drawn there by gold and coal mining, but now tourism is a growing industry.

Images of the West Coast

A view from outside

The West Coast is New Zealand’s longest region, extending more than 500 kilometres down the coast of the South Island.

West Coasters are seen as strong and self-reliant, like their pioneering ancestors.

The West Coast has spectacular mountains and glaciers. The Pancake Rocks at Punakaiki and many underground caves are formed from eroded limestone.

The region has very high rainfall, which often causes floods.

There are large native forests, many in national parks. Because of the forests, there are more native birds than in other parts of New Zealand.

Māori were living on the West Coast and trading pounamu (greenstone or jade) by the late 1300s. The first were probably from the Waitaha tribe. Later Ngāti Wairangi lived in the region, and then Ngāi Tahu came and absorbed the other tribes. West Coast Māori are now called Poutini Ngāi Tahu.

Because the West Coast was hard to get to from other regions, European settlers weren’t interested in it at first. Thomas Brunner and Charles Heaphy, with Kehu, a Māori guide, explored and mapped the region in the late 1840s.

In 1860 the government bought almost all of the West Coast land from Poutini Ngāi Tahu chiefs for £300 (about $36,000 in 2019 terms), and European settlers began arriving.

During the 1860s, after gold and coal were discovered, many more people came to the West Coast, and the towns grew.

Unions and the labour movement grew up among coal miners, and led to the founding of the Labour Party.

Mining declined in the 20th century, but was revived in the early 2000s.

The region’s high rainfall and moderate climate made it a good place to farm. Dairy farming is particularly successful. Often the wet soil needs to be drained for grass or crops to grow well.

Since good roads were built to the West Coast, more people have been able to visit and enjoy the impressive scenery. Tourism is now a major employer in the region.