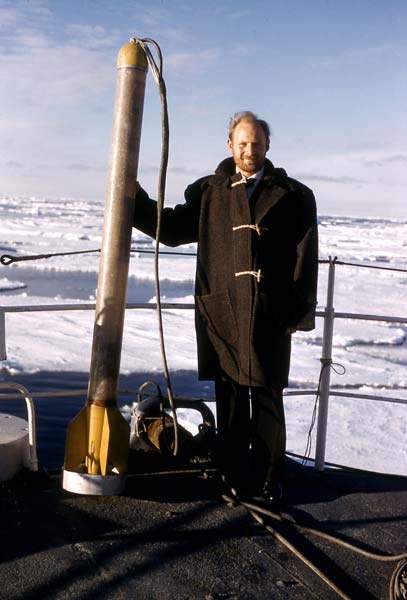 David Christoffel on board the supply ship Endeavour, in Antarctic waters, in December 1958. He is holding the magnetic sensing device (called a magnetometer fish) that he designed.

In the 1960s Christoffel, a geophysicist working at Victoria University of Wellington, played a key role in understanding the evolution of New Zealand in a plate tectonic setting. Magnetic anomalies that had been recorded on the sea floor were a mystery. Christoffel built a magnetometer that could be towed behind a ship – no mean feat in the days before transistors and modern electronics – and arranged for it to be deployed by the wooden supply ship Endeavour, which regularly travelled between New Zealand and Antarctica.

Over a decade, with the aid of graduate students David Ross and Robin Falconer, Christoffel built up a reconnaissance picture of the magnetic variation in the oceans south of New Zealand. He also showed that some anomalies could be correlated and traced over long distances, and were parallel to the mid-oceanic ridge in the south-west Pacific.

In 1970, Christoffel presented a paper to the first conference on plate tectonics for local earth scientists. From his data on magnetic anomalies he showed that the 480-kilometre offset on the Alpine Fault could have taken place within the last 10 million years. There was widespread disbelief, as most of those present thought that movement on the Alpine Fault was much older.