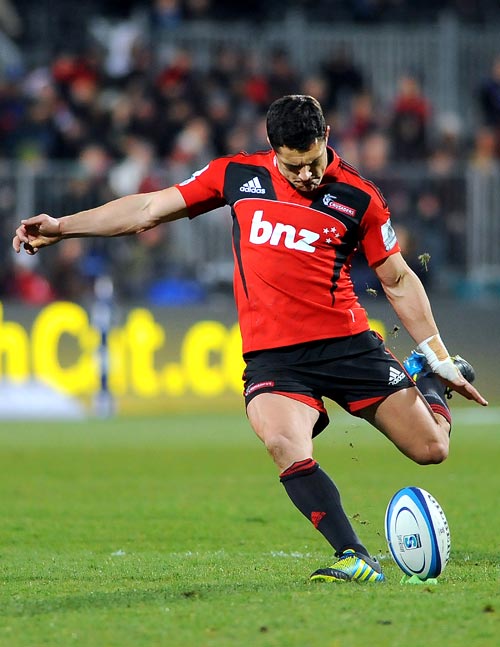 One of the world’s greatest first five-eighths, Dan Carter, shown here kicking for goal for the Crusaders, was also one of the finest Super Rugby players. He played 141 games for the Crusaders between 2003 and 2015, scoring a record 1,708 points and being a member of the competition-winning team three times.

Carter was also an international rugby star of the modern age, as likely to be seen in television or billboard advertising as on the rugby field or training ground. His fame was built on a strong foundation of rugby excellence. Before Carter, Andrew Mehrtens was the All Blacks’ leading points scorer, with 967 points in 70 test matches, including seven tries. Carter retired having scored 1,598 points in 112 tests, including 29 tries.

Some games seemed to be Carter’s alone, none more so than the All Blacks’ 48–18 win over the British and Irish Lions in Wellington in 2005. Of the 48 points, Carter scored 33. Unlike some first five-eighths, Carter was also a strong defender. He first played for New Zealand in 2003 and became an integral member of the national team, but a groin muscle injury kept him out of the latter stages of the successful World Cup campaign of 2011. After guiding the All Blacks to victory in the 2015 World Cup final, Carter joined Parisian club Racing 92, reportedly on a world record salary of £1.4 million (NZ$2.48 million).

Cyril Brownlie ordered from the field, 1925