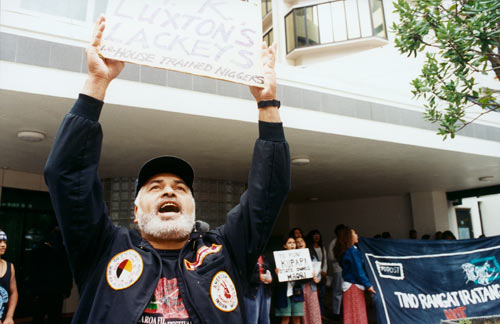 Dave Ruru, a veteran radical who took part in the 1975 Māori land march, protests against the government's planned 'fiscal envelope', which would have financially capped Treaty of Waitangi settlements, in 1995. Protesters to Ruru's right hold a placard referring to 'Te Puni Kūpapa', an insulting reference to Te Puni Kōkiri (the Ministry of Māori Development) which backed the fiscal envelope proposal. Kūpapa were Māori who fought alongside the Crown against other tribes during the land wars of the 19th century.