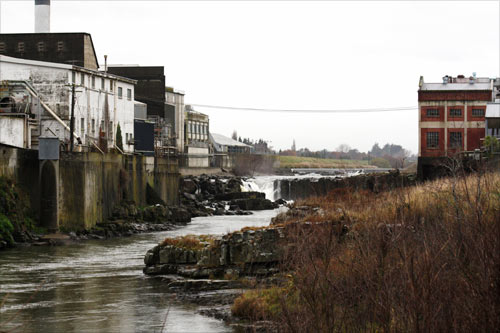 The Mataura freezing works opened in 1893 and drew on the Mataura River for a water supply. The falls used to be much larger, but were blasted in the course of providing water for the works and other factories.

Famous off course in

Famous off course in Southland; famous for being the town with the freezing works; famous for the trout and it should be equally famous because it’s a whopping 190 km long. That last fact I didn’t know about. Off course I had seen the river on many occasions, stopped by the river banks to take in the views in Gore and even marveled at the bridge in Mataura when travelling the ‘back way’ to Dunedin. But off course, once one starts to dig a little deeper into something, and I’m not talking about digging in the river off course, a few new facts that makes you say ‘oh, I didn’t know that’ pop up. I never knew that the river’s headwaters are all the way in the mountains to the south of Lake Wakatipu, or that it enters the Pacific Ocean at Toestoes Bay on the Southern coast of the South Island. This also brings me to the fact that I’ve not been to Toestoes Bay before, so I have to put that on my forever increasingly long ‘I must go there’ list. The name Mataura comes from the Maori words ‘mata’ (red) and ‘ura’ (eddying). The coloring in the water is caused by iron oxides in the local swamps – but don’t panic, this isn’t some sort of chemical spill; it is a naturally occurring compound that plays an important geological role in nature. Mataura was established around 1858 and lies on State Highway 1, 13 kilometers south west of Gore and 53 kilometers north east of Invercargill. The Mataura River falls over a bed of sandstone to create Mataura Falls, which is known by local Maori as ‘Te Aunui’ (the great current). In the late 1800’s the town was a major mail coach stop from Dunedin to Invercargill, and the location of the bridge built in 1868 soon attracted businessmen who set up premises on the east bank of the river around the area called ‘Bridge Square’. In 1882 the Southland Frozen Meat and Produce Export Company was established after purchasing land on the west bank of the Mataura River. The company built the second freezing works in Southland and was opened in 1893. The machinery was powered by electricity from a hydro generator powered by the water diverted from the falls. In 1989 the Mataura works came under the ownership of Alliance Group Limited. Today the factory extends for quite some distance along the bank of the river after development and expansions throughout its history. Perhaps the Freezing Works is what Mataura is well known for these days, but in the mid 1870’s a gentleman from Invercargill (James Bain) formed a company that went on to establish a paper mill on the east bank, downstream of the Mataura Falls. By the late 20th century, however, the mill started to lose too much money and it was closed in 2000. Mataura River was off course also awarded a ‘Water Conservation Order’ in 1996 because of its value for outstanding fishing. There are many guided tours available for the keen angler and many fine motels or lodges to rest at after a day on the riverbank. For locals off course, it’s home, it has many things one needs to live in a small and famous town – swimming pool (opened in 1956), primary school, fast food restaurant, its own Order of St Johns, a General Store (also known as the local Four Square), Butcher shop, and other locally owned shops. Gore and Invercargill are within driving distance; the country scenes surrounding the town are stunning (just check out the reserves and parks in Mataura and you’ll agree), and the Mataura Community center is a great source to find out what else is happening in and around the town. So to say Mataura is just a ‘freezing workers’ town would be incorrect, it’s a perfect location for someone looking for quiet village life, but yet be close enough to the action to not miss out on anything.