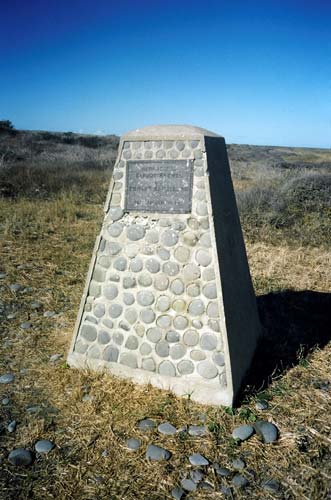 Māori and early European travellers in the South Island often travelled along the east coast. On 4 January 1844 Edward Shortland set off from Waikouaiti and went north to Akaroa. Twelve days later at Waihao, south of Timaru, he met Bishop G. A. Selwyn travelling the same coastal route north. This monument records that meeting on 16 January 1844.

Passes between Canterbury and the West Coast

Jock Phillips, 'European exploration - Canterbury and the search for a pass', Te Ara - the Encyclopedia of New Zealand, http://www.TeAra.govt.nz/en/photograph/11266/waihao-monument (accessed 25 May 2020)