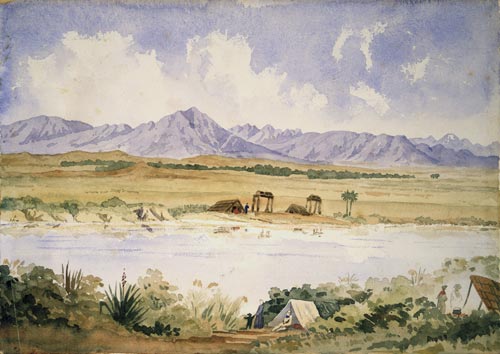 Frederick Weld had a sheep run on the Wairau plains, and when settlement began in Canterbury he was keen to make money by taking sheep south. He visited Canterbury and painted this watercolour in 1850 of the northern Canterbury plains. While there, he heard from Māori reports of a route to the Awatere River in Marlborough. He travelled by coast to Marlborough, then went along the Awatere. Looking towards the Clarence River, he thought he saw the Canterbury plains. He sent drovers down the route with 700 sheep, but another range blocked their way and they abandoned their flock. It was to be another four years before Weld found a suitable route south.