Treasures from the past (1st of 2) 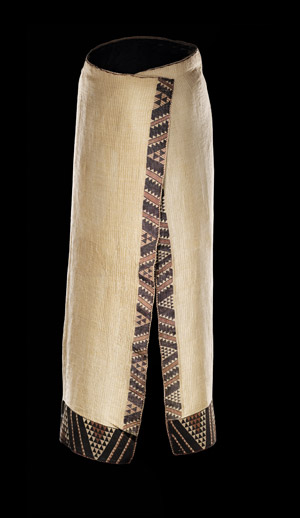 Although Māori and Pākehā settlers of Wellington saw each other as encroaching on valuable land, they did cooperate in many ways. This finely woven cloak bears testimony to the goodwill that often existed between them. The people of Pipitea pā in Thorndon were building a house when a young boy named Thomas Wilmor McKenzie decided to explore inside. In doing so he inadvertently breached the laws of tapu applying to unfinished buildings. Te Rīrā Pōrutu, chief of Ngāti Hamua and Te Āti Awa, drew his mere (club) to strike Thomas, but Ruhia Pōrutu threw her cloak over the boy and pleaded for his life. She was exercising a woman’s prerogative to save a person’s life in this way. The Pōrutu and McKenzie families became lifelong friends, and in 1947 the cloak was gifted to the national museum.