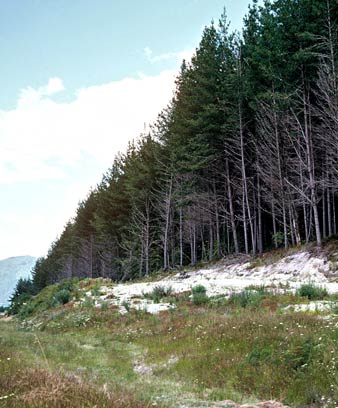 In the 1800s, New Zealand’s native forests seemed to provide a limitless source of timber, but by the early 1900s the supply was running out. To meet the demand for wood, vast forests of faster-growing introduced species – especially radiata pine – were planted.

New Zealand’s native forests were once logged for wood. By the start of the 20th century, the government realised that to have enough wood in the future, they would need to plant new forests.

They planted exotic trees – species from overseas, which are faster and easier to grow than native trees. They included eucalyptus, larch, Douglas fir and different kinds of pine trees, including radiata pine.

The government Forest Service planted new forests, and so did more than 20 companies.

The Kāingaroa plains, in the middle of the North Island, were perfect for planting a new forest. They were fairly flat, had only grass and scrub, and were not very good for farming.

Lots of people were employed in planting the forest, including unemployed men on work schemes during the 1930s depression. It was hard work in rough and cold conditions.

By the 1950s the trees had grown big enough to harvest.

Some of the wood was cut up into timber, and some was made into paper and wood pulp. Sawmills, and pulp and paper mills, were built to process the wood.

New towns sprang up near the mills and the forests, so the workers and their families had somewhere to live. They included Tokoroa, in southern Waikato, and Kawerau, in the Bay of Plenty.

Some of the land that was used for growing trees is now being converted into farms or lifestyle blocks. But many people still work in forestry and others are researching new ways to use wood, including combining it with synthetic materials.

Print the full story
Next: Page 1. Forestry in the 1800s Next