‘Scene of the Wairau massacre’ 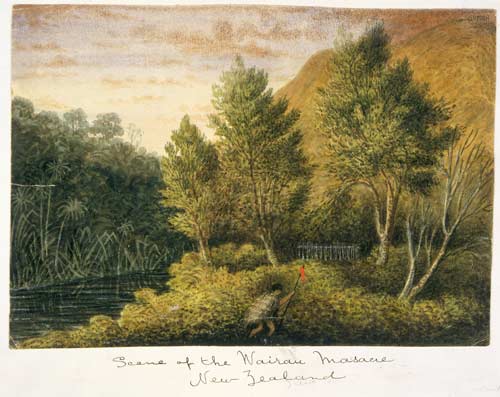 Charles Emilius Gold’s impression of the scene of what was known to horrified European settlers as the ‘Wairau massacre’ was painted in 1851, eight years after the event. In April 1843 the New Zealand Company sent surveyors to land in the Wairau Valley, which the Ngāti Toa tribe denied had been sold by them. When Ngāti Toa chiefs Te Rauparaha and Te Rangihaeata disrupted the survey an armed force was sent to arrest them, and in the confrontation a stray shot killed Te Rangihaeata’s wife, Te Rongo. Following an exchange of fire, nine of the European force surrendered. The prisoners were then executed to avenge Te Rongo’s death. In all, 22 Europeans and at least four Māori died.