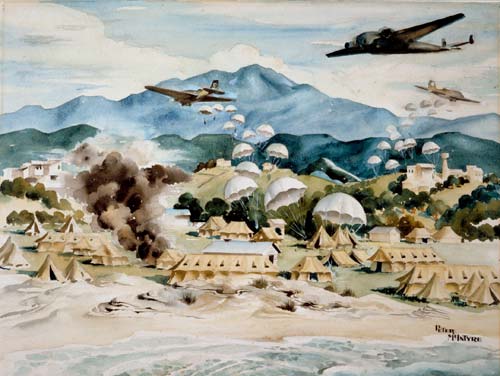 When war broke out in Europe in 1939, New Zealand again responded by sending troops to fight in Europe, North Africa and the Mediterranean. There were New Zealand soldiers on Crete when the Germans invaded. This watercolour by New Zealand artist Peter McIntyre shows German paratroopers landing near a hospital at Galatás on 20 May 1941. Some New Zealand soldiers were killed, but others escaped or were captured. Although New Zealanders fought on in Europe after the Japanese entered the war, the fall of Singapore in 1942 led to a significant shift in New Zealand attitudes. The United States, not Britain, came to be seen as the nation’s main defender.