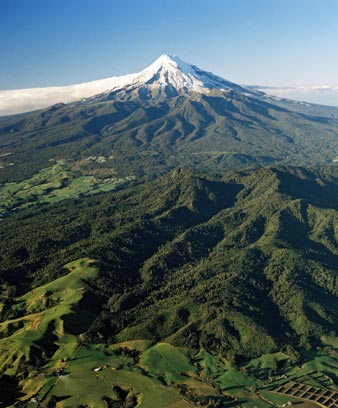 The mountains of the Kaitake Range, Pouākai Range and Mt Taranaki (Mt Egmont) dominate the territory and history of the Taranaki tribe. They symbolise the peaceful endurance of a people who have survived invasion and the confiscation of their land, and are now looking to the future.

The peaks of Taranaki

The tribe and its territory

The area of the Taranaki tribe covers the west cape of the North Island. It stretches from Ōnukutaipari in the north to the Ōuri River in the south, and includes Mt Taranaki (Mt Egmont).

War with other tribes

The Taranaki tribe’s close relationship with neighbouring tribes was constantly changing. There were regular raids by Waikato tribes from the late 1700s, and other northern tribes arrived armed with muskets in the early 1800s. Some tribes moved south, changing the balance of power in the region.

There was further upheaval when European settlers arrived in New Zealand after 1840. Their demand for land suitable for farming put pressure on all Taranaki tribes to sell. The tribes refused, and war broke out between Māori and the government in 1860. Many villages in the Taranaki region were destroyed. Land was confiscated by the government and sold for settlement.

In 1862 Te Ua Haumēne of the Taranaki tribe founded a new religion, called Hauhau (also known as Pai Mārire, meaning ‘goodness and peace’). The faith taught that Māori people would eventually get back their land. It spread rapidly among Māori, and was seen as a threat by Europeans. Fighting broke out between Hauhau followers and government forces.

Founded in the mid-1860s, the village of Parihaka became the centre of a movement which encouraged non-violent resistance to the confiscation of land. Its followers prevented surveys, and ploughed and fenced land that was occupied by European settlers. Many of them were arrested and held without trial, but the protests continued. Finally, government troops marched on Parihaka in 1881, arresting or driving away most of its inhabitants. Protests followed by periods of imprisonment without trial continued until the late 1890s.

Today there is a new interest in the tribe’s traditional knowledge and culture, and the story of Parihaka continues to inspire art, poetry and song. More than 6,000 people said they were descended from the Taranaki tribe in 2013.

Print the full story
Next: Page 1. Tribal origins Next