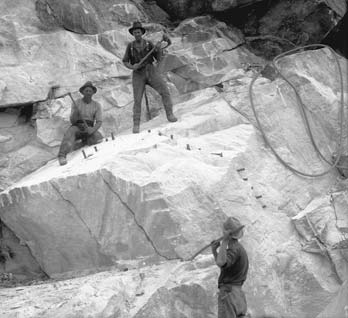 The energetic suburban handyman working his concrete mixer was for years one sign of a growing nation laying the foundations of the future. The roads, bridges and buildings of the urban environment have been constructed with millions of tonnes of New Zealand’s abundant greywacke, limestone, and other rocks.

The roads we drive on, the buildings we live and work in, and the pavements we walk on are all made of rock that has been dug or blasted from New Zealand’s hills and river plains.

New Zealand has plenty of greywacke, a rock which is washed down from the Southern Alps and other mountain ranges, and is ideal for crushing. Other rocks are also crushed into aggregate. This can be chips for making roads, or smaller gravel – used to make concrete, for everything from garden paths to high-rise buildings.

Limestone is a rock that originally formed under the ocean. It is made of the bones and shells of tiny sea creatures that died millions of years ago. New Zealand has some dramatic limestone formations, including the Pancake Rocks on the West Coast, and the Waitomo caves near Te Kuiti.

Limestone is used in cement, an ingredient of concrete. It is also used as a fertiliser on farmland, and for roading. There are two large quarries in the Waikato region. Quarried limestone used to be burnt in kilns, and workers could be temporarily blinded by the lime powder.

Clay is a sticky, poor-draining soil. When fired in a kiln it becomes extremely hard. Bricks, tiles and pots are made this way, as well as ceramics – from fine porcelain to sewer pipes.

In the 19th century clay was dug out and made into pipes to drain the soggy farmland. Crown Lynn Potteries began making tableware from clay in the 1930s, and by 1970 produced 15 million pieces a year. But New Zealand’s ceramics industry declined when cheaper goods were imported in the 1980s. Today, around Auckland and Northland clay is dug to make bricks, pipes, ceramics and other products. Small pits also supply clay for potters.

Print the full story
Next: Page 1. Raw materials Next