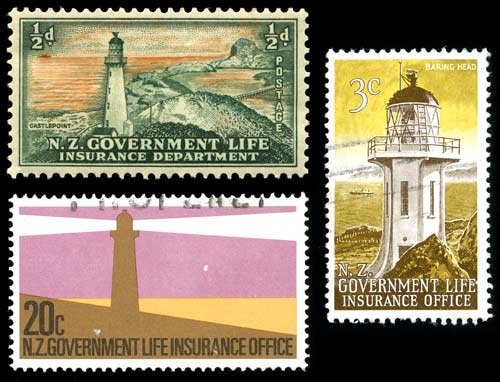 The first stamps issued in New Zealand that did not feature Queen Victoria were the 1891 Government Life Insurance Office's stamps, which featured a lighthouse. All subsequent issues also had depictions of lighthouses, which were a 19th-century symbol of insurance. The halfpenny 1947 stamp featured Castlepoint lighthouse, which is east of Masterton on the Wairarapa coast. The three-cent Baring Head stamp was issued in 1969 on the centenary of the founding of the Government Life Insurance Office. The 1981 issue marked a radical departure with a highly stylised and colourful design as seen in the 20-cent stamp.