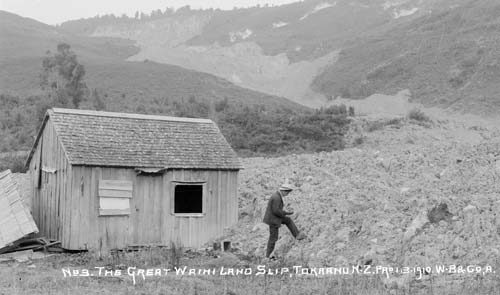 The Waihī landslide of 1910 occurred on the southern shores of Lake Taupō. It was just the latest in a series that had their origin in weakened, hydrothermally-altered cliffs on the hills above the township. Known as the Hipaua Steaming Cliffs, this region consists of volcanic clays which become unstable with rain. The 1910 landslide, which killed one person, was larger than the 1846 mudflow which killed 60 Māori. The 1910 event was probably triggered by a hydrothermal eruption and the resulting landslide surged into the lake, forming a 3-metre-high wave.