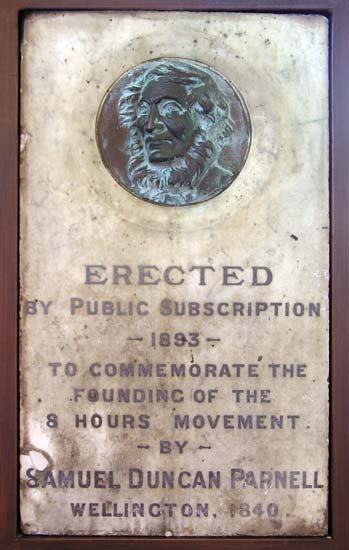 Samuel Parnell became known in New Zealand as the father of the eight-hour day. After demanding these hours for himself in February 1840, he convinced others to do the same. In a meeting in October 1840 the labourers of the new colony agreed to work eight hours, from 8 a.m. to 5 p.m. (with an hour for lunch), and anyone who did not was to be ducked in the harbour. This plaque was originally mounted at the Wellington Public Library in 1890. In 1962 it was discovered in storage in the Trades Hall, and was eventually put up in the Bolton Street Chapel in the 1990s.