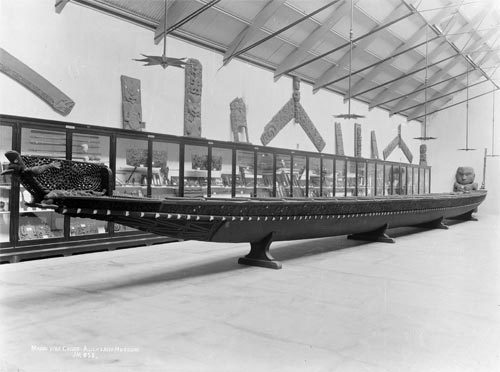 Te Toki-a-Tāpiri is one of the last of the traditional waka taua (war canoes) remaining from the 1800s. It is 25 metres long and carried up to 100 people. It was built around 1836 for Te Waaka Tarakau of the Ngāti Kahungunu tribe. Before it was completed it was presented to Te Waaka Perohuka of Rongowhakaata who, along with others from his tribe, carved the prow, the sternpost, and the thwarts. From here it passed through the guardianship of the Ngāpuhi people, then Ngāti Te Ata and Ngāti Whātua, until it ended up in the hands of the government. It is now on display in the Auckland War Memorial Museum.

In 1853 Perohuka presented the canoe to Tamati Waka Nene and his brother Patuone of Ngapuhi, to commemorate the end of Ngapuhi's musket raids on the East Coast. In return he was given a stallion named Taika, who was one of the first horses on the East Coast. (http://tekakano.aucklandmuseum.com/objectdetail.asp?database=maori&objectid=290)

Can someone please tell me

Can someone please tell me WHY this waka was given to ngapuhi people, as tohi-a-tapiri was built and carvered by my Great grandmothers uncles,i am having trouble tracing her, Family story goes that my Ggreatmother and her 3 sisters were captured from Wairoa and taken up North and that the waka was built in exchange for the girls but i can not find any record of this.Can anyone help Thank you Regards Meg