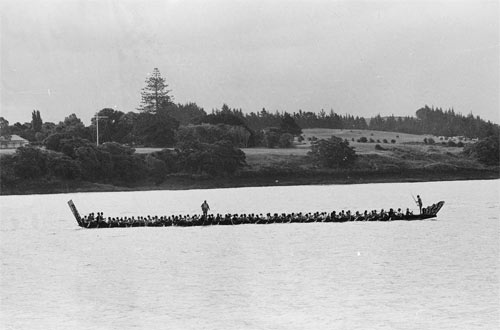 This side view of Ngātokimatawhaorua illustrates the amazing length and carrying capacity of waka taua. In tradition, when Kupe discovered New Zealand his waka was named Matawhaorua. But on his return to Hawaiki, it was re-adzed and named Ngātokimatawhaorua (‘ngā toki’ means ‘the adzes’). It was captained by Nukutawhiti on its return to New Zealand. The waka shown here was named after the original and built for the centennial of the signing of the Treaty of Waitangi in 1940. The inspiration for its construction came from Te Puea Hērangi, an influential leader in the King movement, and the project was directed by Pita Heperi (of Te Tai Tokerau) and Piri Poutapu (Waikato). It is now kept at Waitangi, in the Bay of Islands.

bro im from ngapuhi to

bro im from ngapuhi to