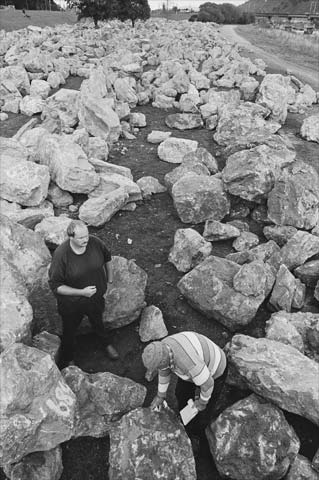 It is not easy to obtain the rocks known as rip-rap, which are big enough to hold back rivers. Stopbanks also need to be carefully designed so that the rocks are not eroded. Wellington lacks suitable rocks, so they have to be imported from outside the region. The rocks laid out here near the Pōmare railway station in the Hutt Valley are from near Collingwood (Nelson) and Pongaroa (Wairarapa). Jeff Evans looks on while his father Bill spraypaints numbers on the rocks, which were used to build groynes in the Hutt River.