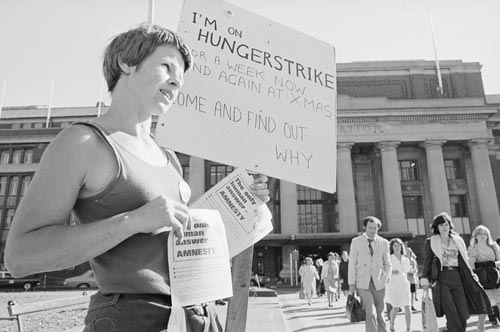 During the early 1970s there was a growing movement within New Zealand that was critical of past racist attitudes. This led to a review of immigration policy in 1974, and the introduction of a non-racist policy. One expression of New Zealanders’ increasing concern about racism was their condemnation of the dawn raids on Pacific Islands overstayers in 1976. This Pākehā activist is handing out leaflets to Wellington rail commuters.

Jock Phillips, 'History of immigration - The end of a 'white New Zealand' policy', Te Ara - the Encyclopedia of New Zealand, http://www.TeAra.govt.nz/en/photograph/3987/action-against-racism-1976 (accessed 20 May 2022)