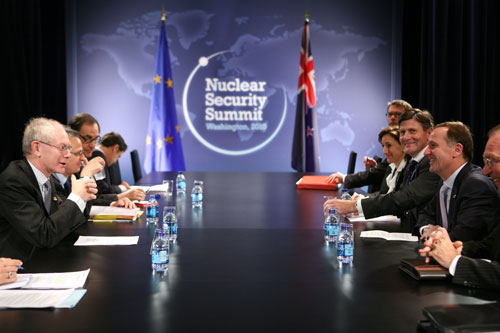 This image shows Prime Minister John Key (second from right), representing New Zealand at the Nuclear Security Summit in Washington DC in April 2010. Facing him is Herman Van Rompuy, president of the European Council (far left). The Nuclear Security Summit was an international meeting hosted by US President Barack Obama. The meeting discussed securing nuclear materials and preventing their smuggling for use by terrorist groups. New Zealand has joined a number of international counter-terrorism initiatives, including the Proliferation Security Initiative (PSI) of 2003 and the Global Initiative to Combat Nuclear Terrorism (GICNT) of 2006. These aimed to prevent the trafficking of nuclear materials and their use by terrorist groups. New Zealand is also a signatory to the Nuclear Terrorism Convention of 2005, a United Nations agreement.