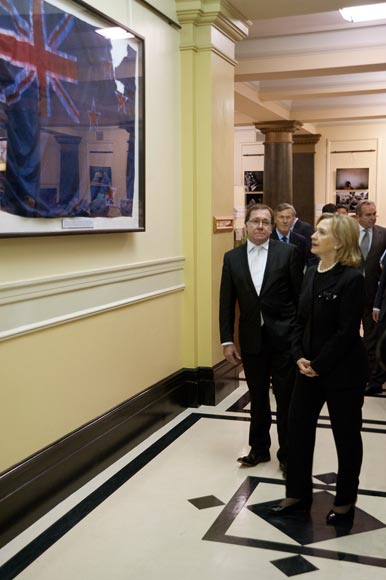 US Secretary of State Hillary Clinton inspects a New Zealand flag recovered from the wreckage of New York’s World Trade Center. The flag, now displayed in New Zealand's Parliament Buildings, was held in the flag room of the World Trade Center. It was found by New York police officers Greg Matthius and James Moran as they searched through the wreckage of the twin towers following the terrorist attack of 11 September 2001. In March 2002 the flag was presented to Prime Minister Helen Clark during a visit to New York. It is now displayed in the first floor foyer of Parliament. The photo was taken on 4 November 2010, during Clinton's visit to New Zealand. She is accompanied by Murray McCully, New Zealand's minister of foreign affairs.