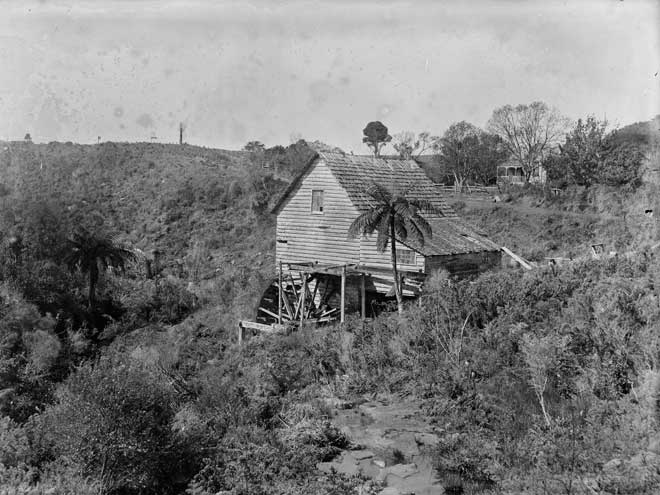 New Zealand’s first flour mill was built by the Church Missionary Society at its Waimate North mission station. This view of the mill, from about 1900, shows the waterwheel that powered the mill, driven by water from a small stream.

Great and detailed info. I

Great and detailed info. I have one suggested possible correction to one small point... the biscuit making factory I believe was NOT down stream of the Paramata mill, but at the same level as the mill with it's water wheel driven off another smaller stream and can be seen today as a swampy zone down the left hand side of Ash cottage.... I have seen an old photo of the mill in which the biscuit making water wheel can be seen poking out of the scrub in that position. As a side note I have the original receipt for the biscuit making machine from 1855 in my collection of Bedggood artefacts. Cost 200 pounds! Regards Gavin Bedggood, Paihia

Barry Lawrene, Can you please provide some evidence that "John McMullan" was the person who built the first Flour mill as I have Stewart McMullan a Millwright living in the area at the time. Stewart a few years later built mills at Rangiaowhai, Mercury Bay and Aotea (Beechamdale). Stewart was listed as a Millwright in 1828 working for Sir John Jamieson at Reagentsville. I would be interested to see the evidence as I thought John McMillin was a Blacksmith. Thanks Robyn

The photo above is NOT the