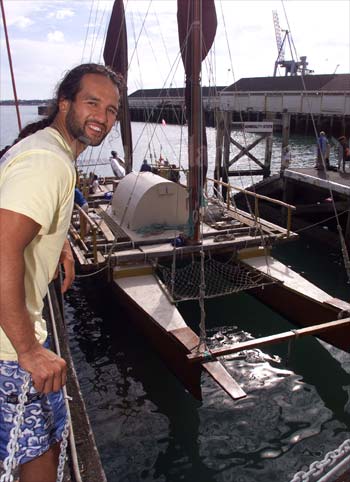 Te Au-o-Tonga, a traditional double-hulled canoe, was sailed from Rarotonga to New Zealand in 1999, using navigation by the stars. The vessel was steered by three oars, each more than 10 metres long. One oar was fixed in place while the other two were held by crew members – a demanding task when winds were strong or when the canoe approached its top speed of 12 knots (22 km per hour).

hi my name is bob from

hi my name is bob from korea. i was looking for him(Jason Porter) for long time. i met him at Dae jeon EXPO 93 in korea. i had visited him 1997 too. after that i moved USA then it hard to contact with him. i am really good friend with jason but i forgot his contact number. can you please tell me his telephone number or email that i can contact with jason please.... or if you can please tell him my number or email then he can contact with me.... my number is 1-702-308-8345 [email protected] i wish i can attach my pic but i dont know how... thank you for put his pic on this website that i can finally find him.. thanks again and will waiting for good news from you... - Bob Shin -