Jane Handley and her daughter 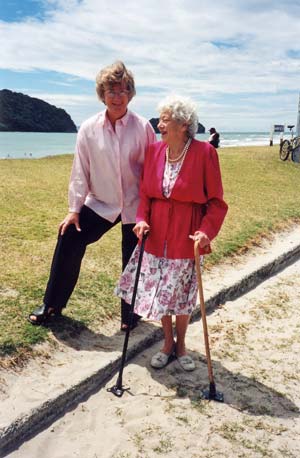 From 1974 English migrants to New Zealand no longer received government assistance, and had to apply for entry permits. The number of permanent migrants from England subsequently declined. Those who did come often followed their families. One such migrant was Jane Handley, pictured here with her daughter on Whangamatā beach. When her husband of many years died, Jane decided to join her daughter, who had lived in New Zealand since 1968. Despite being over 90, and having lost her new Auckland house in a fire, Jane became a New Zealand citizen and declared her happiness to be in her adopted country.