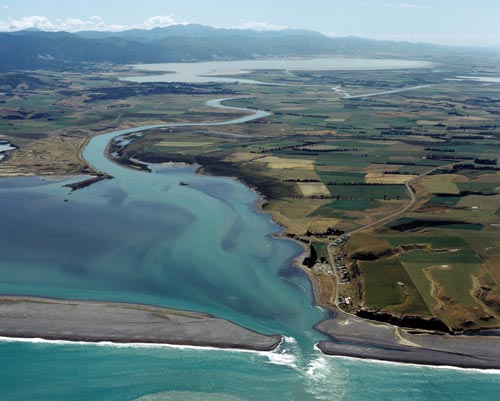 Lake Wairarapa (back) drains into Lake Ōnoke, which is separated from the sea by a 3-kilometre gravel spit. In 1965, Wairarapa elder Tame Saunders described the opening and closing of the lake mouth, which corresponded with the annual eel run:

‘Throughout the ages, the mouth of Wairarapa Moana has paid homage to its eel migration by obligingly closing its mouth at the end of February or the beginning of March. Legend records that Rakai Uru, the taniwha who is the caretaker of the lake, is responsible for this seasonal closing. Rakai Uru takes the form of a large totara log. When the migration is about to take place he makes a journey out to sea, and the mouth of the lake closes behind him. Legend also mentions that the taniwha Rakai Uru pays a visit to Lake Ellesmere in the South Island. After Wairarapa Moana has been closed for about a week, the eels begin to migrate downstream.’