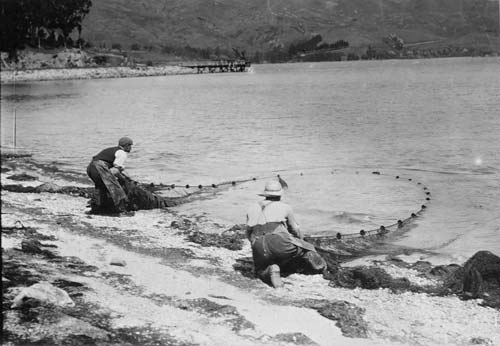 Men of the Dellabarca family fish at Lowry Bay, Eastbourne, around 1907. In the 1890s another Italian family, the Russos, had arrived in Wellington from the island of Stromboli. They began fishing the Eastern Bays, establishing a village in Rona Bay. On a trip across to Wellington, Bartolo Russo met the brothers Luigi and Antonio Dellabarca, part of a crew on a visiting ship. He convinced them to emigrate, and the men joined the Russos in the Eastern Bays. They later returned to Italy to bring back their wives.