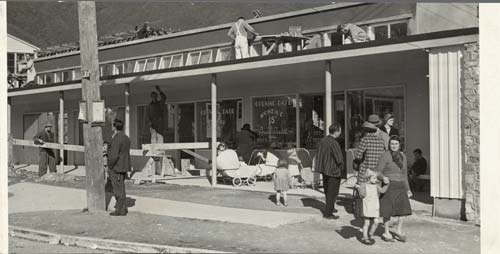 When Lower Hutt’s state housing suburbs were being built, the government agreed that retailing in the area should be controlled by a consumers’ cooperative. Under this arrangement every household would hold shares in the co-op. Profits from trading would be returned to shareholders through annual dividends.

The Hutt Valley Consumers’ Co-operative was established in 1945. This is its Naenae store in Seddon Street on opening day in July 1946. It was initially a great success, partly because of the public’s desire to forge a better world after six years of war. But by the 1950s there was a more individualistic spirit, and the government allowed private retailers to compete with the co-op. It was unable to adapt, and closed in the early 1960s.