Wreck of the Penguin 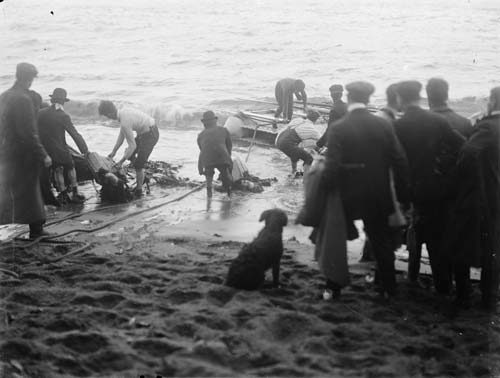 Men pull bodies and wreckage from the surf at Cape Terawhiti, after the wreck of the ship Penguin. During a storm on the night of 12 February 1909 the boat had drifted off course and struck Thom’s Rock on Wellington’s south coast. The 102 passengers and crew took to lifeboats, but some of these capsized in the heavy seas, with the loss of 72 lives. It was New Zealand’s worst 20th-century maritime disaster. A half-day holiday was declared for the funeral on 16 February, and crowds lined the streets as a cortège of cabs and lorries wound its way to Karori cemetery.