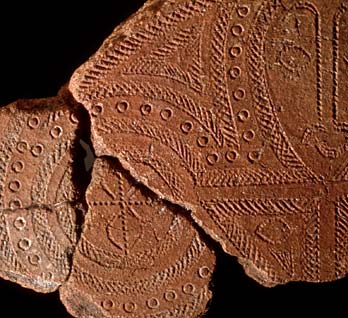 The world’s first seafarers set off from South-East Asia, sailing into the Pacific on simple rafts. Thousands of years later their Polynesian descendants began exploring further east, guided by the stars and the winds. How did they survive these journeys into the unknown? And when did they discover New Zealand, the final major land mass to be settled? Radiocarbon dating and computer voyaging have provided a wealth of insights.

Main image: Pottery of the Lapita people, ancestors of the Polynesians

The Pacific Ocean, showing Near Oceania

The Pacific, the world’s largest ocean

The Pacific was the first ocean to be explored. But New Zealand’s isolated islands, in the cold south-western waters of this ocean, were the last to be settled. Migration eastwards across the vast expanse of water occurred over thousands of years.

There were two periods of settlement:

The Lapita were the first to reach Remote Oceania. Between 1100 and 1000 BCE they spread to West Polynesia (including Tonga and Samoa). On single-hulled outrigger canoes they brought pigs, dogs, chickens, yams and bananas; they also invented a new style of pottery, decorated with faces.

About 3,000 years ago Polynesian culture developed in West Polynesia. Skilled navigators in double-hulled canoes gradually discovered remote islands to the east, using their knowledge of the stars and the winds to return home safely. Groups would then set off to start new settlements. Migration through East Polynesia began after 1000 CE.

The original migrants came from a region in East Polynesia which Māori later called Hawaiki. Bringing dogs and rats, taro and kūmara (sweet potato) to New Zealand, they found plenty of wildlife, including birds now extinct: the moa, a species of swan, and the giant Haast’s eagle.

Print the full story
Next: Page 1. The world’s first seafarers Next